Impacted by Hurricane Ian or Nicole? Avoid the long hold times and use our 24/7 online option to Submit your claim here.
Have a question about policy extensions in Florida or Louisiana? Click on this link to access our FAQ’s.

Stay warm and cozy while avoiding the dangers of cold, snow and ice 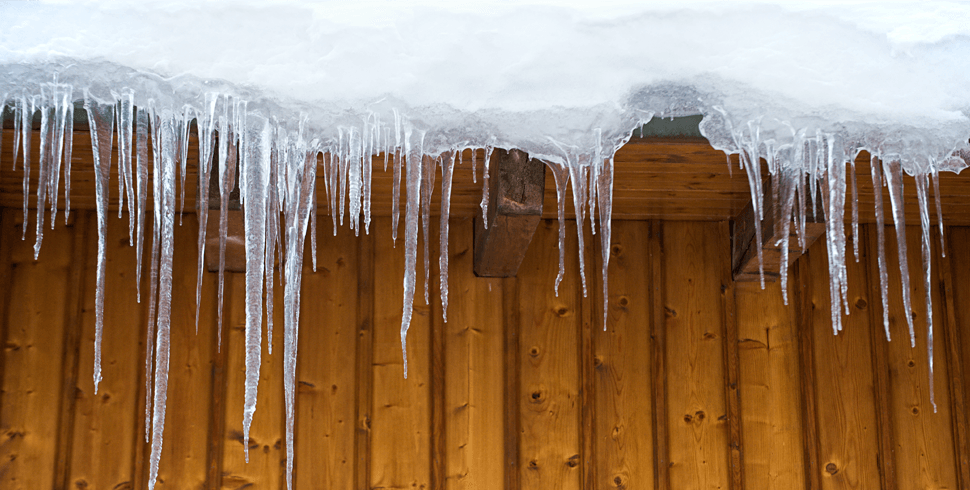 Have you prepared your home for the hazards of winter? Many people don’t realize that taking a few simple actions could save thousands of dollars in unexpected repairs and prevent needless aggravation from the risks of the winter season.

Snow and ice are a leading cause of homeowners insurance claims. The claims from freezing and resulting water damage can be several thousands of dollars. In fact, winter storms inflict damages of more than $1.25 billion per year on average in the U.S. If you follow these simple steps, you can help to safeguard your main asset, your home, from serious and costly damage:

An ice dam is a build-up of ice at the lower edge of a roof, usually at the gutter and extending up the roof several feet. It is formed when snow on the roof melts, runs down the roof, and then refreezes at the edge of the roof where the temperatures are much cooler. The ice builds up and blocks water from draining off the roof. The water is forced under the roof covering and into the home, often causing extensive damage to ceilings and interior walls. In order to prevent ice dams, keep your gutters clean and free of leaves, sticks, and other debris – you can even install gutter guards to prevent these items from getting into the gutters in the first place. You should also keep the attic well ventilated, and make sure the attic floor is well insulated to prevent heat from getting into the attic where it can melt snow on the roof, which leads to ice dams.

Some roofs can handle more snow than others. In New England, roofs should be designed to hold between 40 and 70 pounds per square foot. The total accumulated weight of two to four feet of snow could be as high as 60 pounds per square foot. If there is ice, it is much heavier – one inch of ice equals a foot of snow. You should not climb on your roof to remove snow – rather, use a snow rake while standing at ground level, or have it professionally removed.

Snow, ice, and winds can severely damage a roof. You should check that the structural integrity of the roof is maintained. Keep shingles in top condition, and replace any that are cracked, split, or loose. Caulk around skylights, pipe stacks, chimneys, and other roof openings to prevent snowmelt from entering the home. If your roof needs to be resurfaced, install a metal roof – this is the best roofing surface to guard against snow and ice damage.

Since the frequency of house fires increases in the winter, ensure that all smoke and fire detectors/alarms are in good working condition. Consider installing a carbon monoxide detector in addition to smoke and fire alarms.

Chimney fires are a major hazard in the winter. Have the chimney cleaned before the start of heating season to remove harmful and flammable creosote buildup. Chimney fires can move from the chimney to interior walls, to rafters in attics, and to the roof itself, which can lead to catastrophic damage to a home. Older homes can be even more susceptible to this as long-term settlement issues can cause a chimney to pull away from the building structure over time, and mortar will deteriorate causing small openings in the chimney that hot gases and sparks can get through and into surrounding structures.

A malfunction in a furnace or boiler can create an oil film that can be circulated throughout the home via the heating system. All interior surfaces as well as personal property are affected by a puff back. Extensive and time-consuming cleaning will be required. To prevent puff backs, have the furnace or boiler serviced regularly – at least yearly, and preferably just before the start of the heating season.

Frozen water in pipes can cause pipes to burst due to the water pressure buildup behind the ice blockage. Pipes that are located in areas more susceptible to freezing temperatures, such as attics, basements, and outside walls, are more likely to freeze and burst. All pipes should be well insulated, and any damaged pipes should be replaced. Other things you can do to prevent frozen pipes are: Keep the house warm – interior temperatures should be set to at least 60 degrees. Seal cracks in outside walls and foundations to prevent cold air penetration. Wrap pipes that are more exposed to cold temperatures with heating tape or insulation. Keep cabinet doors open during very cold weather to allow warm air to circulate around pipes. Open water faucets to allow a slow trickle of water, which keeps the water flowing through the lines and prevents freezing. Make sure the sink drains are open. Know where the main water shut off valve is located, and maintain clear access to it so the water can be shut off if freezing to pipes does occur. Water should be shut off at once if pipes have frozen, and a plumber should be called immediately. The more quickly you take action, the better chance you have to prevent your pipes from bursting and causing damage to your home. Never try to thaw a pipe with a blowtorch or other open flame device yourself. If you plan to leave your home for several days or longer, shut off the water and drain the pipes. Alternatively, you can also install an emergency pressure release valve in your plumbing system.

As a homeowner you are liable for injuries that occur on your property due to unsafe conditions, so you should take steps to ensure the safety of anyone visiting your home. Repair steps and handrails to keep someone from falling. Make sure there is no ice buildup on the eves over walking areas – falling ice can be lethal. Keep cat litter, sand or rock salt on hand to spread on icy surfaces.

Power outages can cause damage to appliances, the electrical system, ignition switches, timers, and relays. There are some simple things you can do to protect the electrical equipment in your home from damage: In a power outage, pull plugs from wall sockets – this will avoid any power surge. Once power is restored, plug equipment back in one piece at a time. Install surge protection – surge protection devices should be placed both inside and outside a building. Power lines are not the only path for voltage surges to enter – surges can also come through data lines and telephone lines. Have a qualified electrician install any outside surge protection. Inside surge protectors can be purchased at any hardware store. When installing inside surge protectors, make sure you are protecting all equipment – computers, televisions, appliances, security systems, and any vulnerable items.

Select your state to explore the UPC Insurance products tailored to where you live.